Native Range: The South Pacific and Indian Oceans (i.e., the Indo-Pacific region). The range of the lionfish covers a very large area from western Australia and Malaysia east to French Polynesia and the United Kingdom's Pitcairn Islands, north to southern Japan and southern Korea and south to Lord Howe Island off the east coast of Australia and the Kermadec Islands of New Zealand. In between, the species is found throughout Micronesia.

Non-native Range: Lionfish have been reported along the southeastern United States coast from Florida to North Carolina. Juvenile lionfish have been collected in waters of Long Island, New York, and Bermuda. Lionfish are a popular marine ornamental fish and were possibly intentionally released into the Atlantic. The first lionfish was reported in South Florida waters in 1985 with many additional sightings occurring until they were documented as established in the early 2000s.

Habitat: Lionfish are found in mostly all marine habitat types found in warm marine waters of the tropics. Lionfish have been found in water depths from 1 to 300 feet on hard bottom, mangrove, seagrass, coral, and artificial reefs (like shipwrecks).

Ecological Role: Lionfish are slow-moving and conspicuous, so they must rely on their unusual coloration and fins to discourage possible predators from eating them. Lionfish are now one of the top predators in many coral reef environments of the Atlantic. Lionfish consume over 50 species of fish including some economically and ecologically important species. Lionfish are active hunters who ambush their prey by using their outstretched, fan-like pectoral fins to slowly pursue and "corner" them. 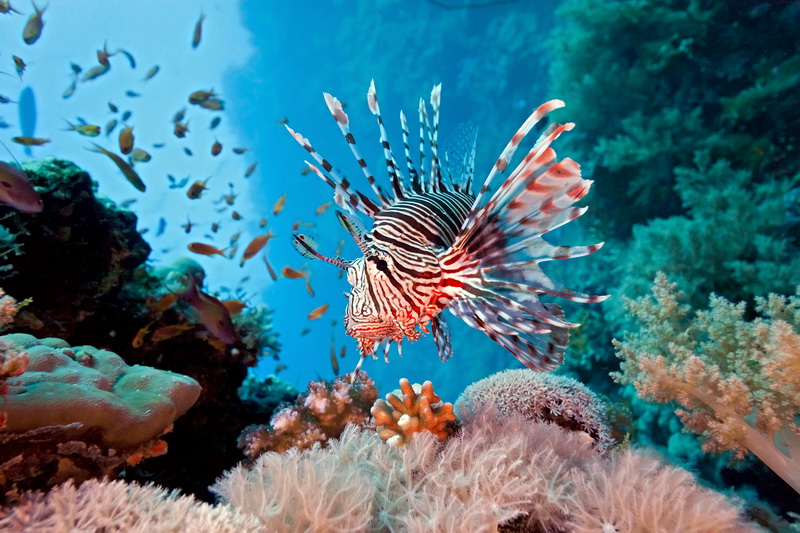 Economic Importance: Although lionfish have been used as a food source in their native range, economically, they are far more important in the aquarium trade. Lionfish are very popular and common aquarium fish, especially in the U.S.

Conservation Status: Lionfish are not currently listed as threatened or endangered in their native range. However, the increase in pollution in coral reefs may negatively affect the lionfish's primary food sources (crustaceans and fish). If lionfish are unable to adapt to declines in their prey species, their numbers may decrease.

Special Precautions: The spines of this species deliver a venomous sting that can last for days and cause extreme pain, sweating, respiratory distress, and even paralysis. Lionfish venom glands are located within two grooves of the spine. The venom is a combination of protein, a neuromuscular toxin and a neurotransmitter called acetylcholine (pronunciation: ah-see-toe-coe'-lean). After the spine punctures the skin, the venom enters the wound when exposed to the venom glands within the grooves of the spine. If you are stung by a lionfish, seek medical attention immediately.

Please consider supporting our efforts to stop invasive Lionfish by donating to this project via the link below. Any amount is welcome! :)